Welcome to our online brochure. Our company has had decades of experience, starting with our parent stained glass company in 1955. We have worked with various types and styles of glass. Our customers range in size between government, ecclesiastical and educational institutions to residential. Our end purpose is for you, as a customer, to feel inspired and more than satisfied, whatever the commission. Please feel free to browse and contact us when you need a quote for your next glass project.

Our creative glass history is known for its blend of modern and traditional styles and enjoyed for its wealth of colour.. We have created stained glass windows across Canada that offer a wealth of imagery and inspiration. Our portfolio includes stained glass commissions from government and churches to residential and educational institutions. To achieve beauty in our stained glass, we are committed to incorporating the finest hand blown antique glass from around the world and the highest quality craftsmanship. The subject matter is thoroughly researched to ensure conveyance of beauty and content, that depicts the ultimate artistic quality. 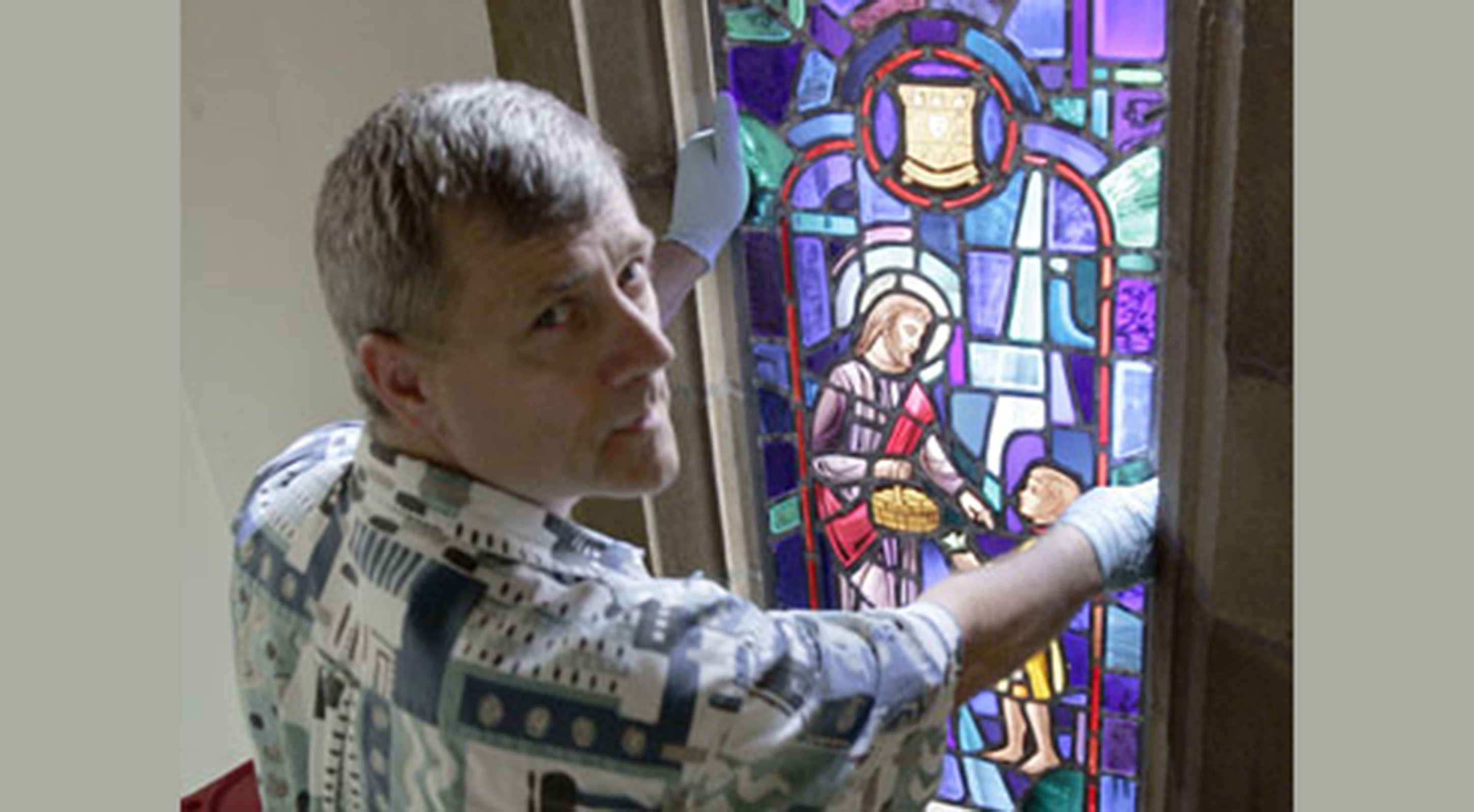 Our studio has been in business for almost 23 years, although Christopher Goodman has been making stained glass for 50 years. Chris started working in glass in 1970, at the age of 15 with his father, Russell C. Goodman. At this time, Christopher's whole family was involved in the Russell C. Goodman Stained Glass Studio, Scarborough, Ontario. One of Christopher's first jobs was to work on the House of Commons, Parliament Buildings, Ottawa, Canada. This task lasted three years! Christopher continued to steadily work at his father's business while attending school. After graduating from Ontario College Art, he made stained glass his full time aspiration. Exposure to the vast symbolism inherent in stained glass led Chris to teach Iconography at the School of Theology, Ottawa and recently Chris and his wife were honoured with the Diamond Jubilee Award.

At a young age, never imaging she would have a career in the stained glass field, Angela always loved the beauty of glass sheets her mother used in crafting Tiffany lamps during the craze in the 70's. She has always been involved in some training of art whether it was summer school at the Banff School of Arts, Graphic Design/Printing Tech at George Brown College or Fine Art Studio, University of Toronto. Through both sets of parents friendship, Chris and Angela eventually crossed paths and were married in 1988. Angela's apprenticeship began. She was fortunate enough to watch over the master's shoulder (Russell Goodman) as his portraits came to life. "Each commission has a life force that evolves and has conceptual or visual excitement at every stage." The couple draws inspiration from their past while incorporating more modern techniques of casting and fusing.

Founder: "Russell Charles Goodman is a designer and fabricator of stained glass windows, principally for churches. His career â€œin the art of light and colourâ€ started through a fortuitous meeting in 1942, when his facility at sketching attracted the attention of John (Jack) Ramsden, art director at the Robert McCausland Ltd. glass studio, Toronto. A visit to the studio was a revelation. Enthralled by the racks of glass sheets in a multitude of colours, Goodman decided to take a four-year apprenticeship. This was merely the beginning of a long initiation into the traditional knowledge of materials and skills necessary to stained glass window fabrication." - Sandra Flood
Russell was awarded The Order of Canada, The Governor General's Award, The Queen's Jubilee, and The Queen's Diamond Jubilee for all his stained glass contributions in Canada. He will be sadly missed by all. 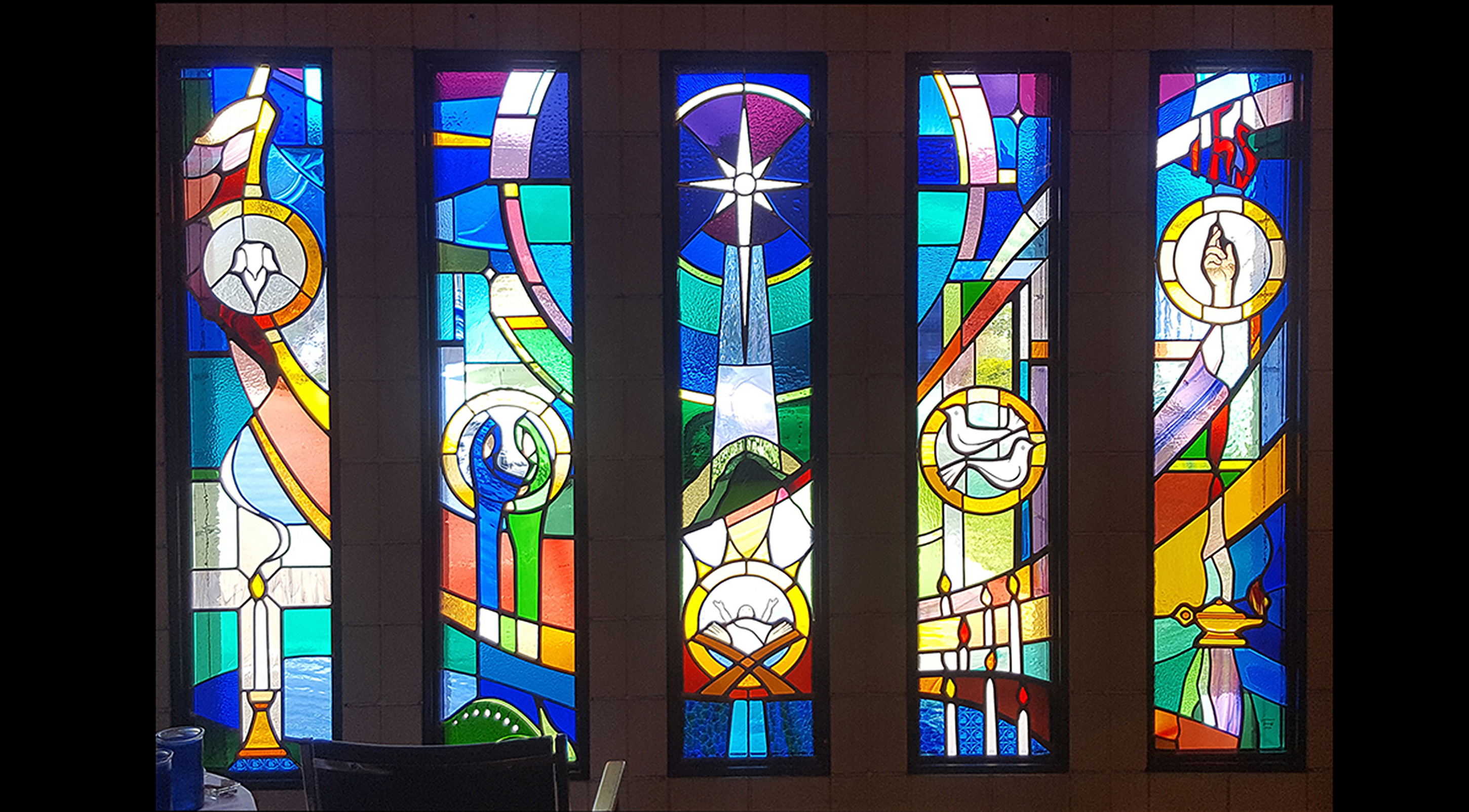 St. John the Divine, Verdun, QC, 1955 - Russell C. Goodman. Restored in 2020 by Chris Goodman. This was Russell's first church commission. Since then, the church has been modified into a condo with all of the stained glass windows being kept in storage for approximately 10 years. In 2019, our studio retrieved Russell's original windows and the restoration began.